For those of you who read last week's newsletter, we talked about all of our future plans that have been cancelled. This week, I wanted to focus on some of the things we can look forward to as we wait for life to resume some semblance of normalcy.

Now, I'm not talking about going to a restaurant, or to see your favorite sports team play, or hopping on a plane to somewhere that isn't having monsoons! I'm talking about life events that will, one way or another, happen.

My oldest son, Gates, will head off to college in four years. I hope that means he'll have the experience of living on campus, and having all kinds of adventures. (And maybe getting into a little less trouble than his old man did...) I know that at least one of my kids will get married, buy a home, and become a dad himself. Of course I do have a preference on the order of those events, although I know I won't get a say. But hey - that's why I pray for them every day!

I'm also looking forward to watching Gates's little stock portfolio (hopefully!) grow, and teach him about saving - he wants a car in a year. He took $400 of his own money and chose companies that he feels strongly about. He asked me if I thought it was a good time to buy stocks, and of course I told him that I can't make that prediction. I also told him that it wasn't a bad idea to buy into some companies he likes. Please note, this is advice specifically for 15-year-olds, not any other age group. And as long as one of those companies isn't JC Penney.

Now, if you're wondering what my 15-year-old bought, here's the breakdown: He bought $75 of Apple because of the multiple Apple devices that are perpetually glued to his hands. He bought $75 of Microsoft because he's an Xbox kid, and there's a new one coming out at Christmas. He bought $75 of Google because all of his school assignments are Google-based, and that was pre-pandemic. He bought $75 of Amazon because that's his mall - and his method of comparison shopping. Even if we're in an actual store, Gates will get out his phone and check comparable items on Amazon before buying. He bought $50 of AMD because he's a gamer, and he thought their chips were the best. Then, a few days later, he came back and said he wanted to add Nvidia, just in case their chips were better. This truly put a smile on my face - his old man bought Nvidia a long time ago!

I'm in no way recommending you go buy this stock portfolio. Many of you already own those companies via the market indices. The point is that I can look forward to the life events my children will one day experience, and start teaching them about saving and planning for those life events now. It's no different than helping your kids put together that first Lego set, or teaching them how to fish, or shoot hoops. Now that Gates is a teenager, I loved teaching him how to buy his first stock portfolio. I have no idea if he'll stick with it long-term, add to it or start saving for another goal after he gets that car. But having that conversation, and telling him that Dad will match each dollar he invests is teaching him the value of saving and investing at an early age. I wish I'd had that!

If you have kids at home, maybe now is the time to talk to them about the basics of investing. Ask them to name five companies they couldn't live without. Many will name the same companies Gates picked, and some might pick a no-name stock for a company they happen to have an affinity for. I can't tell you how well any of those stocks will do, but that's not even the point here. The point of fishing isn't always to catch fish, is it? Sometimes it's just about relaxing with your thoughts over a cold beverage.

The point is to get them interested, and one of the best ways to let them feel involved is with brands and companies they actually use. The more ownership they feel in that first investment, the more they'll want to learn about what they're doing.

I know many of you have been blessed financially, and have never talked much to your kids about money and investing. The good news is that it's never too late to ask about those five companies and start teaching financial life-skills. While we're all still spending more time at home, take some time to do this exercise with your children or even your grandchildren - you can even do it over Zoom, or FaceTime. A few hundred bucks now could make a world of difference later - even if their stock picks turn out to be busts. 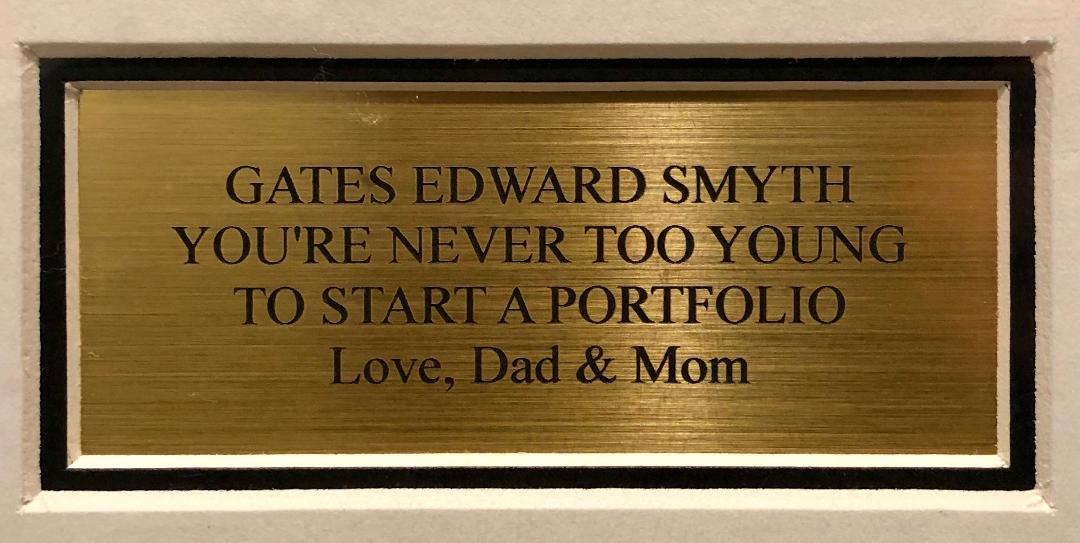 Speaking of busts. Gates, since I know you're reading this, I want to apologize for that single stock share I bought for you when you were born. I thought it would be best to buy the stock that shared your initials - General Electric. Clearly, Dad failed on that one! GE has fallen from roughly $36 per share to about $6. Not exactly the return we were hoping for. I still love the plaque on the frame though, because it's true: You're never too young to start your first portfolio.

4 Ways the World has Changed

It's Clear: Communication is Key